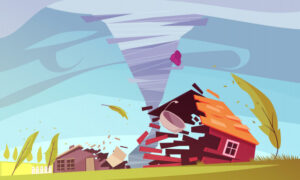 According to the National Severe Storms Laboratory (NSSL) of the National Oceanic & Atmospheric Administration (NOAA), the US experiences approximately 1,200 tornadoes annually, more than any other country. Are you and your family prepared for a natural disaster? Risk Management Solutions, a catastrophe modeling company, says storms in the US result in nearly $17 billion in damages and losses yearly. The more you know about potential hazards, the better you’ll be able to protect your family from harm. Let’s take a look at how to keep your family as safe as possible from tornadoes.

What is a tornado?

The NSSL defines a tornado as “A narrow, violently rotating column of air that extends from a thunderstorm to the ground. Because wind is invisible, it is hard to see a tornado unless it forms a condensation funnel made up of water droplets, dust, and debris.” Essentially, a tornado results from the energy released during a thunderstorm and can produce some of the “Most violent phenomena of all atmospheric storms we experience,” says NSSL.

Where do tornadoes happen?

As stated by NSSL, tornadoes in the US most commonly occur west of the Appalachian Mountains, east of the Rockies, and in the Central Plains. The most damaging tornado recorded was one that hit Tuscaloosa in 2011 resulting in more than $8.5 billion in damages. Which states get the most tornadoes? Texas, Mississippi, Kansas, Oklahoma, and Missouri, respectively, but NOAA warns against thinking tornadoes can only occur in the media nicknamed ‘tornado alley’ as they’ve been recorded in all fifty states.

When do tornadoes occur?

While NOAA states tornadoes can happen any time of the year if the conditions are right, there are peak months when certain states see the most tornado activity:

NOAA also notes that most tornadoes occur between the hours of 4 to 9 p.m.

Tornado watch or a tornado warning?

According to NOAA, a tornado watch means a tornado is possible – it specifies an area where tornadoes and other storms can occur in the imminent future so you’ll need to prepare to shelter if necessary. A tornado warning means either that a tornado has already been identified or that Doppler radar reflects a thunderstorm which can produce a tornado; so you’ll need to get you and your family to your safe place immediately.

Is there a tornado rating system?

NOAA states that a typical tornado travels approximately 10-20 mph and is on the ground for an average of five minutes.

Additional potential hazards from a tornado

Besides direct damage from a tornado itself, thunderstorms that accompany a tornado can produce damaging winds and flooding, which is the most common and deadly natural disaster in America resulting in an average of $2 billion annually. Blustery winds can generate firestorms and dust storms. A derecho is a powerful storm that produces walls of winds that sweep across the land causing major damage as with the Midwest derecho in August of 2020 that traveled more than 770 miles in 14 hours.

The American Red Cross responds to an emergency event every 8 minutes across the country, including an average of 60,000+ disaster responses annually. Prepping for a natural disaster is key to keeping everyone in your household safe. The Federal Emergency Management Agency (FEMA) encourages homes to be self-sufficient for a minimum of three days including shelter, food, water, sanitation, medication, first aid supplies, and a battery-operated radio for monitoring local weather alerts. Your family should also have an emergency evacuation plan in place which you should be practiced a few times a year. For more safety information, read Actionable Tips to Make Your Home Safer.

The American Red Cross offers additional tips to help keep you and your family safe during a tornado scenario:

DomiDocs is committed to helping make your life as a homeowner the best it can be. Sign up with HomeLock® today and you’ll get immediate home protection along with a comprehensive 7-year property scan report!

5 Benefits of Selling Your House in the Spring 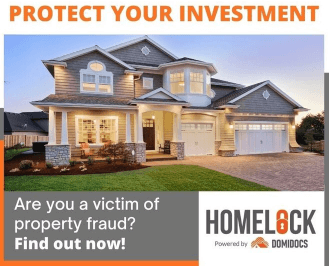 GLOSSARY WORD OF THE DAY

Brokers are legally responsible for the actions of their agents, are licensed by the state to collect fees and to oversee negotiations for a purchase. In the case of the buyer broker, he or she represents the homebuyer in a real estate transaction. He or she earns a commission for assisting the buyer to find a property and represents the person in negotiations.
Full Description | Glossary